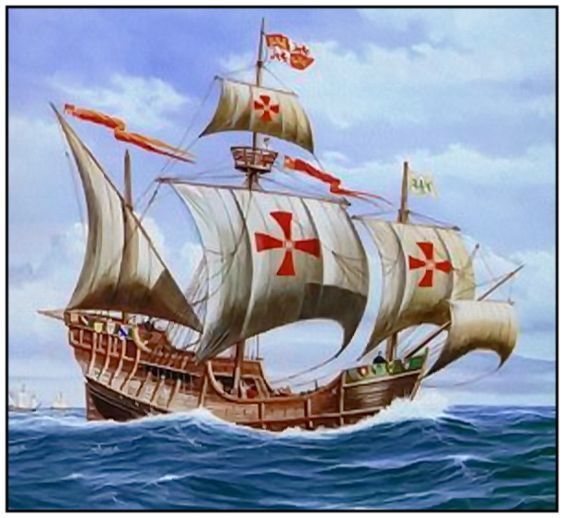 Chapter 8, The Age of Discovery, Part 2

The record of discovery becomes clearer in the 15th Century, when the remarkable Prince Henry the Navigator appears on the stage. He was the son of King John of Good Memory of Portugal. His father got this name because he never forgot who owed him money, thus making Portugal one of the most prosperous countries in Europe.

If you get your atlas out, you’ll see that Portugal is a long, skinny country. Its coast faces both west and south. Being at the very edge of Europe, its people were forced to look either out to sea or towards Spain. Since mountains obscured the view to a country they didn’t much like anyway, the average citizen preferred the ocean view.

Since his father took care of the money, Prince Henry was at leisure to dream of what lay beyond his narrow domain. To make things easier, he built at castle right at the bottom corner of his country so he could, on alternate nights, dream west then south.

Everyone, of course, knew that Africa existed to the south, but didn’t have a clue how far south it might extend. It did seem a better bet for exploration, since one could hug the coast rather than sailing off into the unknown (except to the Vikings, but they didn’t care any more). Somewhat complicating Henry’s ambition was the indisputable fact that the further south you sailed, the hotter it got.

The timid felt that if you got too far south, the water would get so hot it would boil. While this might permit mariners to catch already-cooked fish, it could also melt their ships caulking, putting the crew “in the soup” as it were.

They also thought, with some logic, that you might turn black. Because they were sometimes seen in North Africa, the Portuguese knew that the peoples who lived in the south were black or at least dark brown. The Portuguese did a lively trade with the English, who were very fair skinned. Since they knew that the Sun rarely if ever shone there, and that they were darker than the English because it often did in Portugal, it just seemed sensible to assume that the further south they went, the darker they would become. Would their friends and relatives even recognize them when they returned?

As he stood on his lofty battlements, it occurred to Henry that these were risks worth taking, particularly since he could afford to send someone else. As it happened, two young worthies named John Concalves and Tristan Vaz came looking for work.

Being careful not to mention the boiling water and black skin theories, Henry convinced them that riches awaited them along the African coast. So off they went, only to be blown west by a storm, ending up in what is now known as Madeira. Deciding to leave well enough alone, they returned. Henry, it must be said, was a trifle disappointed, but decided to make a virtue out of necessity. He sent them back to colonize, thinking to make the island a way station for future explorations.

They took various seeds along, including grapes. Had they not, the now famous phrase “Have some Madeira, my deara” would not have entered the lexicon.

Henry might well have been known as the “Persistent” as well as the “Navigator” (had not the rules been so strict about such things) for he didn’t give up his dream of exploring the African coast.

Each year, his minions set forth, slowly advancing along the African coast. When they reached the farthest west point of the continent, they discovered that the currents met there and created the turbulence that the ignorant had thought was boiling water. This could easily be avoided. Nor did they turn black, although some of them got nasty sunburns.

As they landed along the coast, they found many of the natives trusting and welcoming. As so often happens in history, they turned this trust to their advantage. Luring the natives on board their ships with the promise of an afternoon’s sail, they promptly put them in chains and brought them back to Portugal as slaves. Needless to say, they didn’t turn white.

While Henry was pleased with this new source of income, what he really wanted to find out was whether, if he finally got around Africa, he could go east and find the Indies.

He knew that the Indies existed and were a source of the spices that Europe craved. Had not Marco Polo traveled over land as far as China?  Had not others retraced his steps and set up the famous Spice Roads that permitted him to have his favorite breakfast, cinnamon toast?  But had not the crafty Turks closed the roads to Europeans, creating a monopoly for themselves?

In 1488, Bartholomew Dias actually reached the tip of Africa, which he called the Cape of Storms, changed to the Cape of Good Hope by later tourism authorities. He wanted to press forward, but his crew had had enough and convinced him to turn back. The fits and starts method of exploration continued until 1498, when Vasco de Gama (bloody leg in English) finally got to India. The place he landed was later called Goa, since he left a few men behind to create a settlement, saying: “We goa back, you stay.”