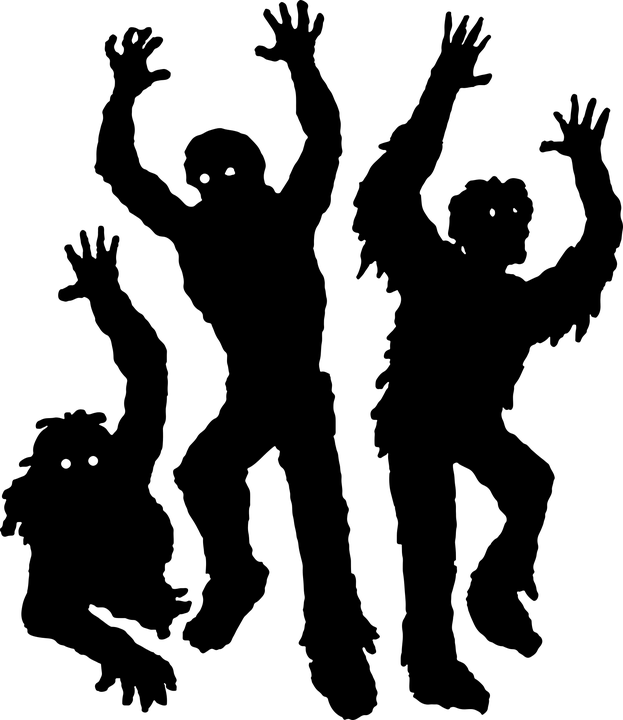 Our peppy poodle Rosie is ever anxious to greet the new day. She rarely tarries abed beyond 6:00 am. On one recent morning, she began the day with her usual guttural emanations, signaling to me that it was time to drag myself reluctantly out of my warm bed, and heed her call to venture forth into the new day, armed with poop bag and leash.

In the latitude of Forest Park, Illinois, it is generally still dark at that hour. One rarely encounters another human soul, with the exception of one fellow on his way to the El station, who looks like he would rather have a job that didn’t require his early attendance. On this particular day, however, I was startled to see a group of men and women – numbering perhaps 6 or 7 – shuffling in my direction on the other side of the street.

How can I describe them?  They all walked with a stoop, and dragged one of their legs behind them. While clothes with holes in them are quite fashionable in some circles, theirs’s seemed mere rags. I also couldn’t help noticing that almost all of them seemed to be missing some body part or other – a hand for one, ears on another, even a nose for some poor chap.

Although not to my taste, I was aware that television’s so-called Golden Age was full of programs featuring the undead, the living dead, the walking dead or zombies of various sorts. Apparently, these creatures are meant to be metaphors for our government, greedy corporations and the popular music business. I had thought them to be products of the fevered imaginations of Hollywood hacks, but now they seemed to actually exist, unless I was still in some state between nightmare sleep and consciousness.

Strangely, I felt no fear. Their progress was so slow – due to their limping – that I should be able to outdistance them, even at my venerable age, with no problem. Even my loyal pooch seemed indifferent to any threat. Thus, I approached to within 10 yards of so, and ventured a “good morning.”

Their leader stopped, as did the others. He stared at me and my elegant canine through rheumy eyes and muttered a “good morning” in reply.

“We seek sustenance for our bodies and souls.”

“Well, there’s a 7-11 around the corner, and if you go back the other way, in two blocks you’ll find a nice breakfast place, but it doesn’t open till 7.”

“Alas, no one seems to want to serve us We’ve been turned away wherever we go”

Changing the subject, I asked “By the way, I may have missed it, but I can’t recall hearing about cadavers rising from their graves at a local cemetery. Are you folks from Forest Home or maybe Graceland?” Their leader, whose unearthly voice seemed to have a phony folksy accent (hiding a hint of North Shore?) seemed confused by my question.

“Well, if you’re not dead,” I said perhaps too forcefully, for he seemed to cringe, “what in God’s name are you?”

2 thoughts on “The Walking Dead”