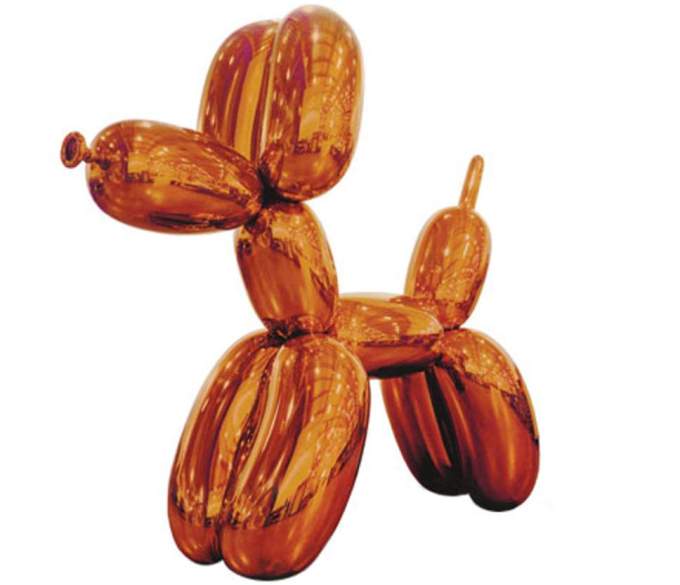 I Wish That Doggie Were Mine

If you had wanted this dog, you would have needed to bid more than the final selling price of $58.4 million that it fetched at Christie’s auction house in New York in 2013. At the time, it was the record price for a work of art by a living artist, in this case, the ubiquitous Jeff Koons. It has since been eclipsed by the sale last year of a painting by David Hockney for $90.3 million. Hockney’s painting included a swimming pool, three human figures and a French landscape, which no doubt accounted for the higher price. To be fair to Koons, his dog is 12 feet high and made of highly polished metal.

The other difference between the two was the Hockney actually did the work himself. He prepared the canvas, mixed the paints and applied them with brushes and other tools of his trade. Koons doesn’t do that. He has an idea, which his employees execute. Several years ago, he was interviewed by the late and acerbic art critic, Robert Hughes, about his famous sculpture of Michael Jackson holding his pet monkey, Bubbles. Hughes: “Did you do this yourself?’ Koons: “Oh no, I don’t do that.”

In explaining his dog and other balloon animals, he once said (I paraphrase) that he was intrigued by balloon animals because they were full of air, just as we are (unless we stop breathing of course). He is now famous for his banal comments, but why should he care?  You see, he has long had a factory and hundreds of employees to turn the stuff out. Recently, like other manufacturers, he has begun to lay people off, preferring to stake his future on robots.

We mustn’t be too hard on Koons. He is simply the culmination of trends in the market that have been developing for 200 years or so. While there have always been people who have bought and sold paintings and sculpture, they did not buy directly from the artist, but from the artist’s customer. In the early 17th Century, if you wanted Rembrandt to paint your portrait, you went to his studio. If you were willing to pay his price, you ended up being immortalized. Or you might be the member of the local militia, who decided to share the cost by ponying up your share to have Rembrandt do a group portrait. Although most folks now don’t now particularly care who you were, they will visit the Rijksmuseum in Amsterdam to admire “The Night Watch.”

In Spain and Italy, artists were employed mainly by the Roman Catholic Church and the aristocracy. Titian painted cardinals and vast religious scenes; DaVinci did “The Last Supper” for a convent and Michelangelo the Sistine Chapel for a pope; in Spain, Velasquez was court painter to the royal family, and most of El Greco’s paintings still hang in Spanish churches.

While dealing in art is nothing new – there is evidence of a thriving art trade in ancient Rome – its nature has changed over time. Auction houses like Sotheby’s and Christie’s have been in business since the 18th Century. Originally, much of their business came from British aristocrats selling off the family treasures to raise cash – often to pay gambling debts. This trend accelerated in the late 19th Century as land rich but cash poor Brits either married off their sons to rich American girls or sold off the country’s artistic treasures to their fathers. American museums are now full of these purchases.

But the main change was not the still-continuing trade in “Old Masters,” but the advent of dealers who bought and sold the work of living artists. On the surface, there doesn’t seem to be anything wrong with this, but eventually dealers began to encourage artists to produce works that the market seemed to be demanding. The “new money” likes cows, so why not paint cows? Or landscapes with cows? But wait, maybe pigs are coming into their own! Like the cows and pigs themselves, art became a commodity.

Even artists with the highest reputations were not immune. The legendary French dealer, Paul Durand-Ruel, who almost single-handedly made the reputations of the Impressionists, was actually responsible for suggesting to Claude Monet his series paintings of objects like haystacks and Rouen Cathedral that changed as light changed during the day.

Durand-Ruel, to his credit, actually kept many of the Impressionists going by buying their work and holding it for years as he championed their cause. Eventually, of course, it paid off and he made much more money than they did.

Dealers now “represent” an artist, much like an agent represents an actor or ballplayer. They organize exhibits and take a commission on any works that sell. It is thus to their benefit to hype the artist as much as they can, using the same tools that anyone selling any product might use. To them, art is a commodity like any other. It is a rare artist who can afford to go his or her own way without regard to the market. Thus, an artist can suspend a basketball in a glass case (our friend Koons again), and be perfectly confident that the critics (who are prepared to swoon over the craziest stuff) will go along and even cheer.

Anyway, if you want to know “how much is that doggie in the window,” you obviously can’t afford it.

One thought on “I Wish That Doggie Were Mine”