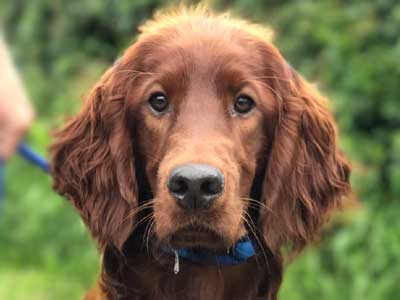 I have owned eight dogs, and almost a ninth. The ninth might have been the first, but it made a tragic mistake. Let me explain. I was living in Homestead, PA, and was either in the last part of first grade or the first part of second grade. My memory is a bit fuzzy in that regard. Anyway, as I recall, my brother Pete and I were ambling along an alley and came upon a stray dog, who defined perfectly the breed “Shaggy Dog.” He eagerly followed us home, perhaps helped along with a bit of rope.

We showed it to our mother, begging her to let us keep it (all young boys want dogs, as you must know). She was dubious, but decided to seek higher authority: “Tie it on the porch. Your father will decide when he gets home.” This we did, and left it there, perhaps repairing to the back yard (black steel mill soot only) to shoot some marbles. Thus, we were not there when my father trudged up the steps to the porch, to be greeted and then bitten by “Shaggy.” My father responded by giving the offender a good kick down the stairs. It wisely took off, never to be seen again.

Not long after, we moved to Chicago’s South Shore neighborhood, where my father was to manage a branch of a furnace company (he later started his own company). Dad was an outgoing, even charismatic, man and made many friends, quite a few in the nicer bars on 71st Street. One of them offered him a female Irish Setter named Rusty. Perhaps feeling guilty for kicking “Shaggy” back into homelessness, he actually accepted.

Now, there was some story told then about why she was in need of a home, but I later suspected that she had been used for breeding and had to be retired. Now, perhaps your image of an Irish Setter is of a proud prancing redhead with shining, flouncing coat. Rusty was in contrast a bit on the dowdy side. Her coat was somewhat faded, and it occurs to me now that she was probably at least 10 years old.

She was very sweet, and patiently put up with the attentions of two young boys who – along with their parents – didn’t have a clue about how to properly care for a dog. We fed her the cheapest dog food my mother could find, Rival, although my father would occasionally come home with some horse meat. She also was given leftover meat bones, which now is apparently a no-no. We did bathe her, which was a hoot, as she would shake wildly after we rinsed her, thus inundating anything within 10 feet.

We lived across the street from the Jackson Park golf course, and in the evenings we would take her there and she would endlessly chase birds. Once, she managed to catch a Mallard duck near a lagoon, which she proudly deposited at our feet. It was unharmed, if somewhat put out. She had, as they say of bird dogs, a soft mouth.

At first, we took her out for her walks. Eventually, however, we took to just opening the back door (we lived in a large apartment building, with the courtyard in the back) and letting her out. She would run down the stairs, do her business (did anyone pick up dog poop then?) and return.  One day, she didn’t return. When we eventually noticed this, we organized a search, both in the park and the neighborhood.

We never found her. Perhaps she went in search of a better brand of dog food, or someone who was more responsible. Or maybe her former owners had simply moved to far away Stangelville, Wisconsin and didn’t want to take her, so she took off on a months-long trek to find them. I like to think she finally arrived, and can imagine the headline in the Stangelville Daily Bugle: “Intrepid Setter escapes Chicago to find former owners!”   (To be continued.)

5 thoughts on “Dogs, Part One”