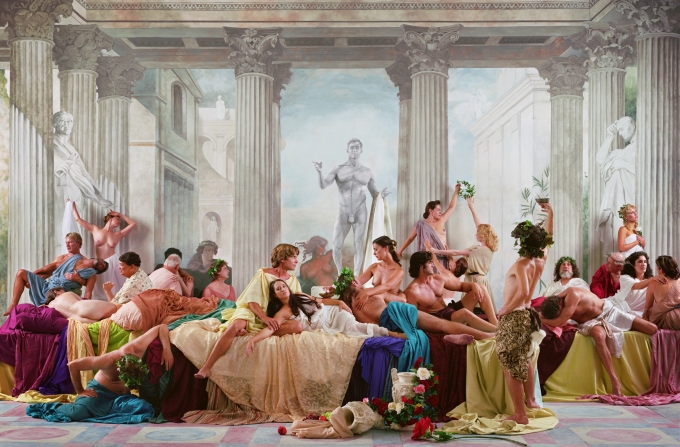 Oh Art, Where Art Thou?

I have been a member of the Art Institute of Chicago for many years. As one of the benefits, I receive a quarterly magazine. It covers current and upcoming exhibits and other matters of interest. The Summer 2019 issue runs to 56 pages and is printed on excellent-quality paper; even its ads are tonier than you’ll find in the average consumer magazine.

In my experience, there are always exhibits at the Art Institute that encourage a visit. Two that interest me currently are a survey of Manet’s late work and another on 100 years of London Underground posters (the subway system, not a group of subversives). Of course, the permanent collections are among the best in the world and are worth visiting and revisiting.

Opening on August 24 is one I might pass up. It includes works by Eleanor Antin, including CARVING: A Traditional Sculpture (1972); and CARVING: 45 Years Later (2017). Both include nude photographs taken by the artist of herself as she was dieting, the first series when she was 37 (148 images) and the latter when she was 83 (500 images!). Front, side and rear views are included.

Now, Antin’s naked body isn’t any more repulsive than most folks, although it wouldn’t excite lust. Nudity certainly doesn’t offend me; it’s just that I wonder what would possess anyone to take hundreds of nude photographs of herself and happily exhibit them in public. According to the magazine, the 1972 work (which is owned by the Art Institute) “comprises a grid of 148 photographs that sequentially capture the artist’s journey to lose 10 pounds over a 37-day period. Antin’s deadpan pseudo-scientific self-portraits mock the objectivity of Conceptual Art while alluding to the conceits of Classical sculpture, which claim (editor’s note: shame on you Michelangelo) that the ideal form lies within a block of stone, waiting to be freed by the artist.”

According to the artist herself, discussing the 2017 version: “It now took forever to lose a single pound. I believe that my older body (editor’s note: I can sympathize) was in a valiant and existential struggle to prevent its transformation into the skeleton beneath the protecting flesh…death.”

Antin is among those fortunate artists who don’t have to bother picking up a paint brush or chisel like poor benighted Michelangelo. Instead she takes photographs, makes videos and creates performances. One of her specialties is arranging models in tableaus that parody 19th Century paintings of ancient Roman events. The one here, part of a series, used Russian painter Karl Briullov’s canvas showing the “Last Days of Pompeii” as its inspiration. Anyone who has tried to arrange a groups portrait can appreciate the work involved in getting the poses just right, although it must be said that the effort pales in comparison to the Russian’s labors in creating his huge canvas (if somewhat overdone to our modern eyes).

Of course, I could have illustrated this piece with a sample from one of her nude photos, but I thought I would leave that up to those interested enough to do a Google search. In the meantime, you could ask yourself this question: would I pose for a series of 148 (much less 500) nude photos of myself? No? Well, clearly you don’t have the temperament to be an artist in this age of existential struggle.