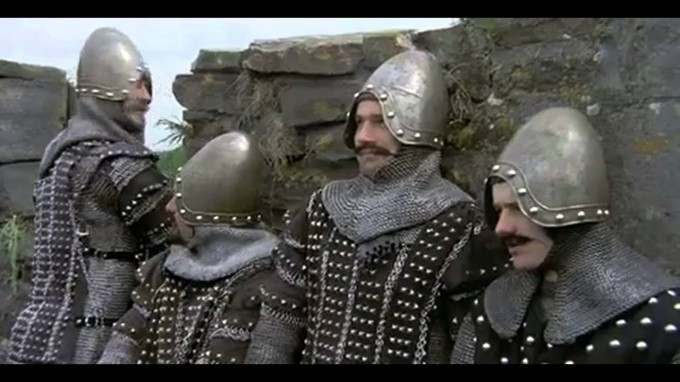 Smithers stood at the ramparts, studying the distant forest with his telescope. “Nothing moving yet, sir.”

“Let me have a look,” I said. I took the telescope – the very one the lookout on the Santa Maria had used when he yelled “Land Ho!” on that fateful day in 1492 – and looked across the plains toward the distant stand of trees. The leaves were rustling in the gentle breeze, but there was as yet no army in sight, although I knew they would approach from there.

“You would think,” said the faithful Smithers, “that they would have had their fill of blood and flesh, that their hunger would be satiated. After all, what harm can we few, we happy few, we band of brothers actually do?”

“Ah, Smithers, but they can’t stand the thought that they haven’t subjugated the whole realm; that there might yet be a small corner that they haven’t conquered and digested. They must have even this insignificant corner. Their hunger is all consuming, their lust for blood terrifying.”

Just then, I noticed a slight movement among the trees. Then, slowly but remorselessly, a mighty host emerged and began forming on the plains. At its head was a golden chariot. Smithers was awestruck, but managed to croak: “Who’s that in the golden chariot?”

“That’s General Pritzker. Apparently, he can’t sit a white steed properly, so the Democratic party had the foundry-workers union cast a sturdy buggy for him. Strangely, his seat looks like a golden toilet.”

“He’s toward the rear, surrounded by his Praetorian Guard. He seems to directing one of his minions – I believe it’s Colonel Cullerton – to relay instructions by cell phone to Pritzker.”

“Why doesn’t he do it himself?”

“He didn’t get to be Field Marshall by talking on a wire-tapped phone. He’s seen what’s happened to some of his foot soldiers.”

We both watched as the mighty host came closer and closer. Even without the telescope, you could see the bloodthirsty mob slobbering with anticipation. At the same time, they issued forth unearthly yells, which sounded like “more taxes, more taxes, more taxes!”

Smithers, the bravest of the brave in most cases, whispered “there’s no way we can survive this attack. And they’ll take no prisoners! Perhaps it would be prudent to retreat now so we can live to fight another day.”

“Well, that seem sensible. Where do you suggest we go?”

“How about Indiana? A lot of our friends are there already.”

“Why not? Issue the orders!”

2 thoughts on “Man the Ramparts!”