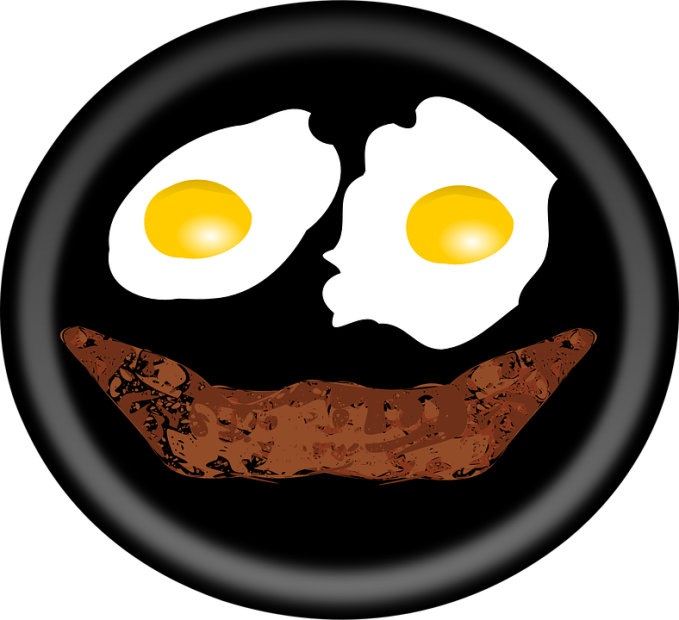 Regular readers of this space will remember my tribute to my late mother’s culinary skills in the article titled Home Cookin’. Some wondered if her accomplishments had influenced my own efforts to advance the cause of haute cuisine.

Indeed they have. I had meant for some time to share my expertise, but more mundane matters always seemed to intervene. This morning, however, I awoke with such a feeling of accumulated guilt that I felt I could no longer withhold my kitchen secrets from a wider world.

Now, my wife Jeanette has a shelf full of cook books. You should forswear the use of any of this advice from so-called experts. If you look into any of these alluring tomes, you will notice vast lists of ingredients and pages of instructions. No human can follow them without getting lost. The following recipes are all inclusive. Simply follow them and you can’t go wrong.

Let’s start with breakfast. Now, as we all know, a productive day must start with a hearty breakfast. If pressed for time – and aren’t we all? – simply grab a box of Cheerios, pour some into a handy bowl and add some milk. Whole real milk is preferred, but 2% is acceptable. Never use skim milk; it is a watery abomination. Adding a bit of fruit can be a healthy addition. (By the way, there is no such thing as “Almond Milk.” It’s juice, for God’s sake.)

If more time is available, can I suggest bacon and eggs? Many happy homes have been torn asunder by an inability to properly fry an egg. Bacon is relatively easy. Put strips of bacon into a frying pan and cook on one side until they look done, then turn over and do the same. I suggest putting the strips on a piece of paper towel to drain while undertaking the eggs.

Do not cook the eggs in bacon fat! It will overwhelm their delicate taste. Eggs must be fried in butter; no substitutes permitted. Simply melt some butter in a non-stick frying pan, then crack the eggs and slide what’s inside the shell into the pan. I won’t insult your intelligence by telling you how to crack an egg. If you botch this simple task, cooking is clearly not for you. Anyway, there are two parts to the egg, the white part and the yellow part. The yellow part, called the yolk, should stay intact during the cooking. If it breaks, or leaks, the purist will throw this egg away and start anew. I would suggest feeding the offending egg to your dog. Dogs, as we know, will eat anything.

Some people will like their eggs “sunny side up.” This simply means you cook the egg until it seems done, then gently transfer it to the plate. But many prefer what is called “over easy.” These are queasy folk who are sickened by runny whites. The double-queasy want their eggs “over medium” to err on the safe side. For the first, you turn the egg over and cook for an additional 10 seconds, for the second, 15. If you lose track of the time, you might end up with “over hard.” Again, if you have a dog, that would be an option; or, you could try that old family refrain “take it or leave it.”

You must, of course, serve toast. Like me, you should always keep a loaf of Wonderbread on hand. Invest in a toaster. Most have controls that permit one to customize one’s toast. For example, it might have a scale of 1 to 5, 1 being “why bother” to 5 being “burnt to a crisp.”  One is constantly amazed at the wonders of technology.

If you want to get exotic and add side dishes like hash-brown potatoes, you needn’t worry. They, and many more breakfast sides dishes, are easily available in your grocer’s frozen food case.

Now that we have dispatched breakfast, we can move on to lunch. As a first option, I would suggest calling a friend and meeting him or her at a local restaurant. This gets you out of the house and hones your social skills. If you have to stay at home, I suggest the classic soup and sandwich combo. For soup, can I suggest one of those classics, Campbell’s Chicken Noodle or Tomato? You can, by the way, enrich the Tomato soup by using milk instead of water.

Although some restaurants gussy up the simple sandwich by adding exotic ingredients, including the dreaded avocado, simple is always better. Really, all you need are two slices of Wonderbread, some sliced lunch meat and cheese preferable pasteurized, processed American. I do tolerate some lettuce and tomato, if time permits.

As to condiments, ketchup must only be used for red meat, or fried bologna. Mustard may also be used for red meat, and goes well with ham and uncooked bologna. Mayonnaise is most acceptable for fowl, but has been known to be slathered on any sandwich, particularly the “Club”, which features turkey and bacon, along with lettuce and tomato. For the bigger of mouth, this classic is often double-decked. For the inattentive, ingredients in the lap are a possibility.

There you have it. Two-thirds of the daily nourishment dealt with, without recourse to any cook book. But a major challenge awaits!

(To be continued. Next week: Dinner is served!)

6 thoughts on “Cooking Made Easy”