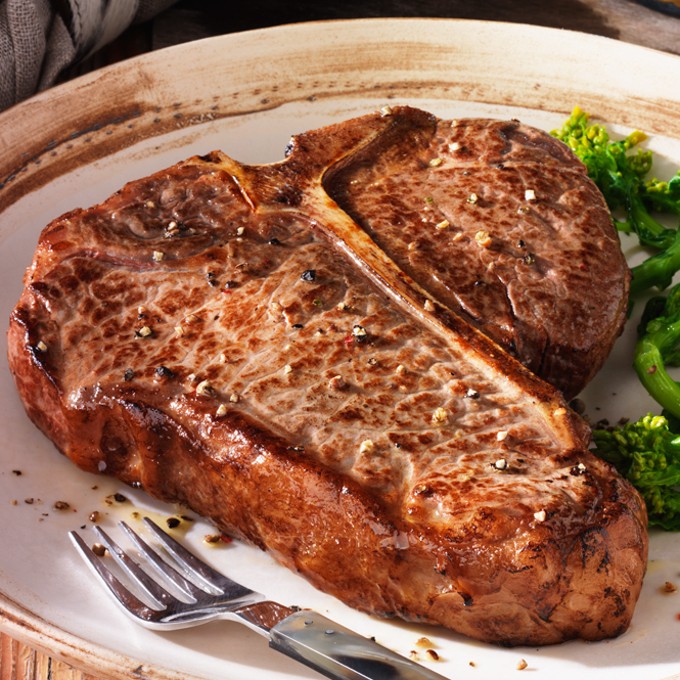 By Patrick F. Cannon
Simplify, simplify, simplify! That has ever been my culinary motto. Now, at long last, I shall reveal my strategy for cooking fine, but simple, dinners.
Let me hasten to say that I have nothing against complicated dishes; indeed my wife Jeanette specializes in meals that often take two or more days to finally reach the table. But I have always been mindful of the dictum of the legendary French chef, Pierre Savarin a la Carte, who admonished his assistants to KISS, as in “keep it simple stupid!” He has always been my hero and guiding light.
This is, of course, just a brief essay, not an outright cookbook. Therefore, I will only share with you two of my favorite and most famous dishes – steak, and linguini with white clam sauce. First, steak. For our purposes, there are three suitable and widely available cuts – porterhouse, New York strip and ribeye. The porterhouse is known as the “King of Steaks,” because it includes both the tenderloin and the strip. It takes a young person to consume this vast slab of beef; it can easily feed three or even more normal folk.
The strip steak is the most common cut, and is entirely acceptable. For the ultimate in tenderness, the ribeye is supreme. But – and I cannot stress this enough – only prime grade beef makes a great steak. Because you will pay between $18 and $25 per pound (depending on the wealth of the neighborhood where your butcher is located), you may only serve steak on rare occasions, unless you’re a captain of industry or a professional athlete. But keep in mind that the steak you buy and cook for $25 would cost $65 or more in a better steakhouse. Alas, poorer people will have to follow Marie Antoinette’s advice: “Let them eat pork.”
No matter the type, have your butcher cut it two-inches thick. Unless you’re feeding ravenous young men, a one-pound steak easily feeds two; a two-pounder, four; and so on. To cook it, you will need a heavy frying pan. When the steak is at room temperature, pat it dry, and salt and pepper to taste. Put some fat – I prefer butter, but other oils or lard are acceptable – into the pan. Turn on the burner (excuse me for being obvious, but some of our dimmer folk do require specific instructions) and when the fat is bubbling or shimmering, add the steak. Brown thoroughly on all sides, then put the pan into a 400-degree oven until the internal temperature of the meat reaches 135 degrees, which is medium rare. An instant-read thermometer is a helpful tool for this and other kitchen uses. (By the way, if you prefer your steak well done, ruin a cheaper cut of beef.)
Put the meat on a cutting board or platter and cover with aluminum foil (titanium foil would also work, but it doesn’t yet exist). After 15 minutes or so, slice against the grain and serve. To me, the classic side dishes are sautéed mushrooms, baked potato and steamed asparagus. Such things as bearnaise or A-1 sauce should only be served with lesser grades of beef. The true “prime” must stand alone! (Well, a great glob of butter could be placed on top when it comes out of the oven.)
Linguine with clam sauce makes a cheaper, but delicious meal. You can be a purist and buy fresh clams (quahog is only one possible variety), but it’s a lot easier to buy canned whole clams. One can is sufficient for 8 ounces of pasta; for a full pound you will need, not surprisingly, two cans.
In a 12-inch non-stick sauté pan, add a goodly amount of best olive oil (“best” is the pretentious word Martha Stewart uses in describing ingredients) or just plain old extra virgin, preferably from Italy. To this, add a bit of chopped onion or shallot and several of those garlic things, also chopped. Sauté until tender and fragrant, but not burned. Add the juice from the can or cans and a generous amount of vino bianco. Season with salt and pepper, a sprinkling of herbs de province, and red pepper flakes to the limit of your tolerance. When the liquid is reduced to your liking, add the clams, which only need heating.
In the meantime, you should have been cooking your pasta in salted, boiling water. When it reaches the perfect state of al dente-ness (which strangely enough means “to the tooth” in Italian), drain it (mandatory) and pour it into the pan with the sauce. Mix the pasta and the sauce on low heat until well mixed and piping hot. If you are that kind of cook, garnish with some chopped parsley and a drizzle of olive oil before serving in a great big bowl or, if you’re a stickler for form, in individual bowls. Serve the same vino bianco you used for cooking.
Technically, you should not provide any grated parmesan cheese, as it is widely thought that it does not complement clams or similar seafood. Yet, some people like to grate cheese on any pasta dish. I do not wish to use my undoubted eminence to guide your wishes in this matter. I can only say that at some Italian restaurants if you ask for parmesan for your linguine with white clam sauce, you will be screamed at, or worse. But if you insist on parmesan, you must only use the real stuff from Italy, not the ground up mixture that passes for it here.