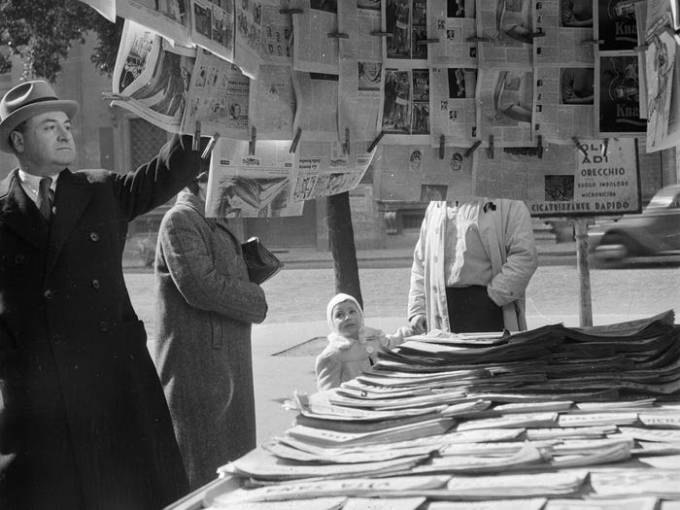 Is No News Good News?

(This piece was occasioned by the news that Alden Global Capital had bought 31 percent of the Chicago Tribune’s stock. They have drastically cut the editorial staffs of every paper they control, most recently the Denver Post. I believe in Capitalism to my core, but groups like Alden dishonor it, for they gut rather than build companies.)

When I moved to Chicago in 1946, there were 5 daily newspapers – Herald-American (the Hearst paper), Daily Times, Sun, Daily News and Tribune.  The Sun and Times merged and survive, as does the Tribune. When I began riding the bus to work in the Loop in 1956, almost everyone was reading either the Sun-Times or Tribune; on the way home, they picked up either the Herald American or Daily News. Newsstands were common and convenient.

Now, when I ride the train downtown, as I do two or three times a month, it is rare to see anyone reading a newspaper; almost everyone, however, is staring at their phones. Are they reading a digital edition of a newspaper? No doubt a few are. While its print circulation has tumbled, the Tribune has seen increases in digital subscribers, as have The New York Times, Wall Street Journal, and Washington Post, among others. And it’s easy to see a future when only digital editions of these and other newspapers will be available. Frankly, I’ll miss turning those pages every morning, but I guess people missed the town crier too.

But what about local news? Between 2004 and 2018, 516 rural newspapers closed, as did 1,294 in urban areas. And almost every surviving newspaper has seen cuts in its editorial staff. In hundreds of counties, there are no newspapers of any kind. Which means no one to regularly keep tabs on the activities of local governments. Perhaps you live in Shangri La, where the politicians always have your best interests at heart; but I live in Illinois, where ex-governors and aldermen spend their declining years in prison.

Although actual figures are difficult to come by, the total daily circulation of the Tribune – print and digital – is now about 550,000; the Sun-Times less than half that. In their heyday, their print circulations were about 850,000 and 450,000 respectively.  Where then are the missing readers getting their news?

Network news programs make some effort to cover national news, but can only scratch the surface in the 30 minutes they have (actually, more like 22 after you deduct the commercials and promos). As you’ve probably noticed, I think local TV news is laughable. Of course, there is no lack of “news” available on the cable channels and on-line. Thus, consumers are able to shop for the point of view about news that agrees with their own. While both Fox News and MSNBC give us a bit of straight news, most of their content panders to the existing biases of their viewers. No rational person would watch either.

There are any number of paid sites that cover politics exclusively, but most people aren’t interested in diving that deeply. In the end, only the daily newspapers have the staff and resources to broadly cover the news, both local and national. Let’s say right here that none of them is perfect. Let’s also concede that most of their staff members tend to the liberal side of the spectrum. They make mistakes, sometimes serious ones that lead their critics to discount the great majority of their coverage that is actually accurate and unbiased.

With a few exceptions, mainly Fox News, President Trump accuses most of them of trafficking in “fake news.” I define “fake news” as the news you don’t want to hear, whether you’re on the left or the right. The President is notably adverse to the truth. He has lied so often that it’s probably pointless to any longer keep track of them, as the Washington Post does (for the record, they stood at 13,435 in October).

As for me, I’ll continue to read the paper every day. If it goes all digital, I’ll read it that way (as I already do when travelling). If I want an up-to-date weather forecast, and breaking entertainment news, I’ll tune in to the local news, whose news directors read the newspapers to see what’s actually going on around town. So should we all.

7 thoughts on “Is No News Good News?”