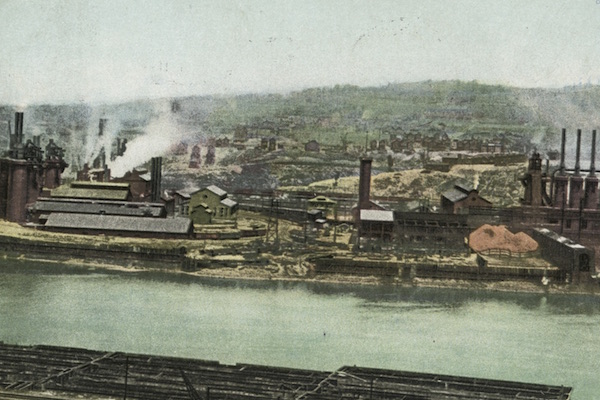 A few weeks ago, we went to the Pittsburgh area to visit my brother Pete, who is battling some health issues. He and I were born in Braddock, PA, downstream on the Monongahela River from Pittsburgh. In the 15 years or so that I lived in the area, I also lived in McKeesport and Homestead, on the banks of the same river.

Braddock, which is now almost a ghost town (a young mayor is trying to bring it back), is the only one of the three that still has a steel mill. Indeed, its Edgar Thompson Works is the only mill left on the river; ironically, it’s also the oldest, having opened in 1872. The reason Pittsburgh originally became a center of steel production was its rivers (the Allegheny and Monongahela meet at Pittsburgh to form the Ohio). The largest of the US Steel mills was in Homestead, where I worked in the 100-inch mill office during the summer of 1956 until my mother died and I moved to Chicago.

The mill could produce sheet steel up to that width. What I did specifically was mimeograph sheets of instructions called Rolling Orders, then deliver them around the mill to stations that needed that information. My strongest memory was crossing the bridges that went over the production line when a slab of molten steel would roll beneath me, causing a rush of heat would take your breath away.

Although I was living in McKeesport then, in the last years of World War II, my family actually lived in Homestead. My mother worked for the US Navy in a lab that tested steel meant for ship construction. We moved to Chicago not long after the war ended.

I mention all this because during our recent visit we stayed at a hotel in Homestead, located on the river in an immense shopping center located where the mill had been. When we checked in, I mentioned to the desk clerk that I had once worked there. He thought I meant the hotel. When I explained I had worked on the site when there was a vast steel mill there, he still was confused, since he was too young to remember it had ever existed.

Our room overlooked the river. The bank opposite was a pristine, tree-covered hill. It had snowed, creating a magical effect. As I watched, an animal – was it a raccoon? – ran along the base of the hill on an abandoned railroad right of way. You could have been in the middle of nowhere, instead of on the former site of a mill whose blast furnaces had lit up the night, and whose chimneys spewed soot that covered surfaces for miles around.

Pittsburgh was then an unhealthy place to live. I remember coming back on the train with my family from Chicago for Christmas. It might have been 1947 or 1948. We arrived mid-morning as I recall, and it could have been the middle of the night, for the smog had literally turned day into night. After an agonizing decline in the 1960s and beyond, Pittsburgh has transformed itself into a clean and thriving small city. If you’ve never been there, you should give it a try after the current pandemic is over. For its size, there is much to see and do.

Back to Homestead. Just the other day, I was watching a documentary on PBS on the Gilded Age, when the so-called Robber Barons held sway. One of them was Andrew Carnegie, whose Carnegie-Illinois Steel Corporation owned the Homestead mill, along with the majority of the country’s steel mills until he sold it all to J.P. Morgan and retired.

When the workers at Homestead went on strike on July 1, 1892 after Carnegie – who was vacationing in Scotland – had lowered their wages, his associate, Henry Clay Frick, with Carnegie’s enthusiastic encouragement, sent a barge of armed Pinkerton agents down the river from Pittsburgh to protect workers hired to break the strike. The striking workers, many also armed, fired on the barge. In the battle that followed, 19 men were killed and more than 100 wounded.

Predictably for the time, the government sided with the company and the strike was broken. Coincidentally, I had just recently written about the Pullman strike of 1894 in Chicago, which had the same result. Together, they largely ended the effectiveness of industrial unions, until legislation in the 1930s codified their rights to organize and bargain.

I don’t suppose the tug of war between capital and labor will ever end. So I leave you with a quote from my friend and partner, Jim Caulfield, perhaps apropos of the recent $2 trillion COVID 19 spending bill: “Isn’t it strange that folks living paycheck to paycheck are supposed to have months’ worth of savings for emergencies while billion dollar corporations are so poorly managed that they’re on the brink of bankruptcy after a week of reduced profits?”