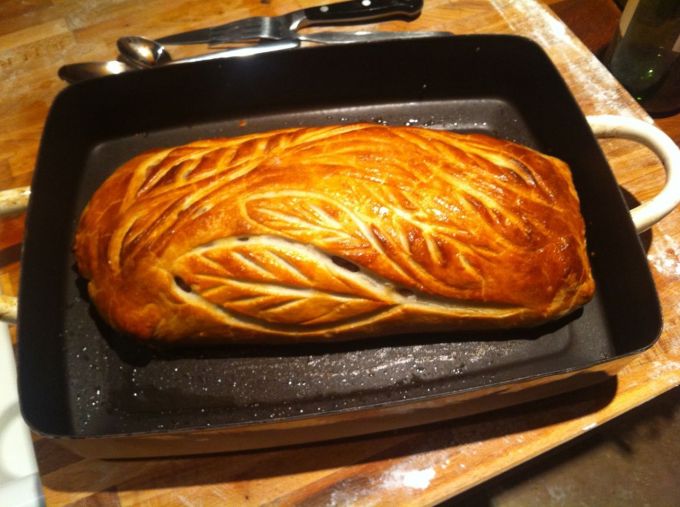 On the 18th of June, 1815, Field Marshall Arthur Wellesley, First Duke of Wellington, defeated the French armies of Napoleon Bonaparte on the plains of Belgium near the village of Waterloo. The bloody battle ended more than 20 years of Napoleon’s rule of France and much of Europe. Wellington, already a hero for his exploits in India, Spain and southern France, was now the most famous man in the world.

Soon after his return to England, he was feted at a lavish banquet at London’s Guild Hall. For the occasion, a special dish was created, ironically by Napoleon’s former chef, Savarin de Escoffier, who was happy to get the job, chefs being loyal only to their kitchens. The result? What we now know as Beef Wellington! Although there were many other courses – no wonder gout was rampant among the upper classes – the beef was served with white asparagus and Hollandaise sauce. For desert, Escoffier created a Bombe au Chocolat.  As promised, I will tell you how to make this historical meal. You will truly eat like a Duke!

The basis for this noble roast is beef tenderloin. This is the same cut of beef used for filet mignon, thus the tenderest part of the cow. Do no skimp here; buy only Prime grade. It may cost $30 a pound or even more, but remember that some fancy restaurant would charge you three times that to cook it for you. For eight servings, a six-pound roast should suffice.

To transform it into Beef Wellington, you will need a hunk of pate de foie gras, some mushrooms, spices, and prosciutto. You will also need the ingredients for butter-rich pastry to cover the whole lot. Now, I checked on the cost of the pate de foie gras, and it should only cost another $100 or so for the amount needed. I would estimate the other ingredients at another $25 or so; so the total cost would only amount to about $300.

$300? You gotta be kidding! Nobody in their right mind would spend that kind of dough to feed eight people, so let’s be realistic and come up with a substitute that would completely satisfy, but only cost a few bucks!

It’s my famous Bologna Wellington. Instead of beef tenderloin, have your butcher cut you a hunk of bologna about 8-inches long. Our butcher, Joseph’s Finest Meats in Chicago, makes a toothsome bologna, but by all means choose your favorite brand. Instead of the imported French pate – made by force feeding geese to fatten up their livers – you can opt for chicken-liver pate or braunschweiger liver sausage (I favor Usinger’s). Regular button mushrooms will suffice, but if imported prosciutto is too rich for your blood, thin-sliced boiled ham should do the trick. For the pastry covering, I find that Pillsbury’s Crescent Dough Sheets – available in your grocer’s cooler — are a handy substitute.

Set the bologna aside. Chop the mushrooms into little bits – a food processor comes in handy here – and put into a sauce pan with gobs of butter and a generous sprinkling of Herbs de Provence. It’s my go-to seasoning, and includes basil, fennel, parsley, sage, rosemary and thyme. Cook until it turns into a paste, then set aside. Put on Simon and Garfunkel’s “Scarborough Fair” while you’re chopping, if it helps you along.

Take your pate or liver sausage and slather it generously over the bologna. Ditto the mushroom paste. Cover this appetizing mess with a layer of the prosciutto or ham, then finish with the dough sheets. When all is snug, cut a few slits in the dough, and decorate if you have an artistic touch. Place it in a baking pan and slide in a 350 degree pre-heated oven. Bake until the pastry is golden brown. Since the bologna is already cooked, no tricky beef temperature to worry about.

I won’t insult you by telling you how to cook the white asparagus, but you may want to substitute bottled tartar sauce for the Hollandaise. The Bombe au Chocolat requires some instructions. For the base, I favor Hostess Twinkies, but lady fingers can work in a pinch.. Using the number of these classic delights you’ll have to work out for yourself, form a rough circle, then fill with more Twinkies. Add layers in descending size until you have something that looks like a rough dome. Fill in the spaces with marshmallow fluff, using a spatula to form the final dome shape. Pour chocolate sauce over the edifice to cover. Refrigerate until the chocolate hardens.

Plate the Wellington, sliced into one-inch slabs. Add three or four asparagus to each. A sprig of parsley as a garnish would not be amiss. A good wine for this incomparable dinner would be generous amounts of Carlo Rossi Paisano. After everything settles, hack into the Bombe au Chocolat and serve generous hunks. With the coffee, you might treat your guests to a tumbler of Mogen David Extra Heavy Malaga. And Bon Appetit!