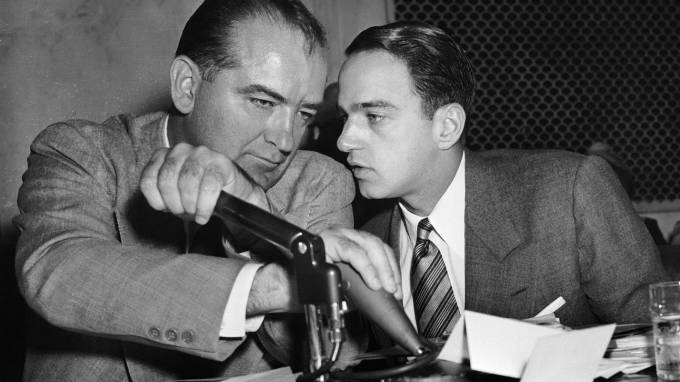 On June 9, during the famous Army-McCarthy hearings of 1954, Army counsel Joseph Welch responded to yet another baseless attack on a soldier by Senator Joseph McCarthy (R, Wisconsin) with these now famous words: “Until now, Senator, I think I never really gauged your cruelty or your recklessness. You have done enough…Have you no sense of decency?”

The answer was: no he didn’t; any more than President Trump did in his appalling suggestion that former congressman Joe Scarborough may have murdered one of his staff members. Scarborough, who by the way served as a Republican, committed the sin of criticizing Trump on his MSNBC show, “Morning Joe.”  As we now know, our president cannot accept criticism. In response, he makes something up, yet another of the thousands of lies that he has peddled to his acolytes.

McCarthy was only a senator, but he managed to convince much of the country that there were Communists under every bed. He made things up too. One day, he would claim there were X number of Commies in the State Department, the next week it would be Y or Z.  Then the Army had been infiltrated by the Comintern, or was it the Navy? And, boy, did he have his acolytes!

A good many of them were clergy of the Roman Catholic Church. Of course, they had every reason to oppose Communism. Hundreds of millions of their members had found themselves behind the Iron Curtain, under regimes that saw religion as an opposing ideology. With the possible exception of Poland, they largely succeeded in weaning the young in particular from what they called “the opium of the people.” In their zeal, they saw McCarthy – who was, after all, an Irish-Catholic – as a Crusader fighting the Godless infidel.

Francis Cardinal Spellman of New York, who never shied from the limelight, was among his staunchest supporters. But so were the church’s foot soldiers. I had a 7th Grade nun at St. Peter’s grammar school in McKeesport, Pennsylvania, who actually had us saying prayers for Joe. I can’t remember her name – let’s say Sister Mary Credulous. Eventually, she became so emotional that she would break into tears. Before the year was out, she was sent away to the mother house, and was replaced by the first lay teacher I ever had, Miss Rizzo. I remember her name, because she was young and inclined to wear rather tight skirts.

Eventually, McCarthy was exposed for the liar and demagogue he was. He was censured by the Senate and faded into drunken obscurity. Trump? I see on the “Real Clear Politics” web site – which publishes a wide variety of opinion – that despite his despicable and irrational blatherings, his support among my fellow citizens holds steady at about 43 percent.

Fortunately (I hope), this level of support won’t get him re-elected in November. If it doesn’t, you can be certain he will call his loss into question, or even refuse to accept it. And with reason. He is afraid that the moment he leaves office, the lawsuits and indictments will begin to pile up. All the prayers of all the misguided religionists including CatholicVote.org., which recently sent me a plea to save the country, not from Godless Communism, but from the Godless Democrats, won’t save him. Knowing this, he will not hesitate to say or do anything he thinks will save him.

(That’s Joe in the photo, being egged on by his equally infamous counsel, Roy Cohn. By the way, Mr. Cohn later became a mentor to none other than Donald Trump. Imagine, just one degree of separation!)