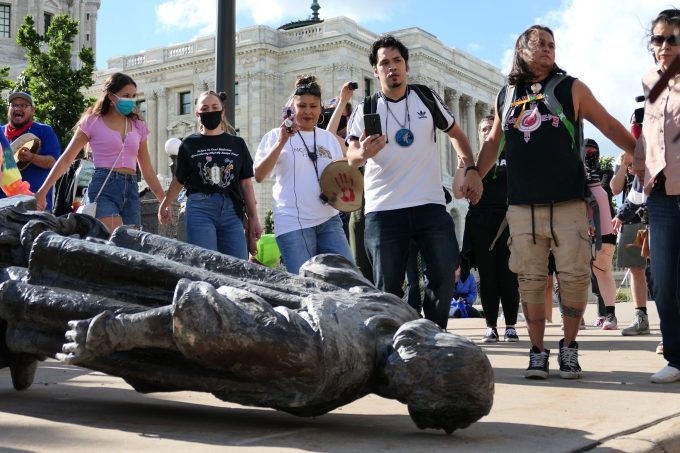 I’m on record as supporting renaming United States government facilities named for Confederate soldiers. In a magnanimous gesture after the Civil War, they were permitted to regain their US citizenship after taking the required oath. Some were even later elected to Congress. But the soldiers in particular who had previously served in the United States Army had broken their oath, which had required them to defend the country against enemies “both foreign and domestic.” They were traitors, pure and simple.

I am also quite happy to see their statues removed from public places of honor, so long as this is done by lawful means. I am completely opposed to having it done by mobs of vandals who have decided they should have this power. Governments who stand aside while monuments are pulled down are derelict in their duty, just as are those who watch helpless and hapless as their cities are burned and looted.

The mobs of the far left have decided to condemn historical figures without themselves seeming to have any historical knowledge. Christopher Columbus has come in for particular attention. He had the misfortune of being the first proven European to stumble upon the Western Hemisphere. Had another Italian or Spaniard gotten here first, they would have likely behaved exactly as he did.

In fact, there were two main reasons why Columbus and other explorers set forth in the first place: to convert the heathens to Christianity, and to exploit the new lands for profit. Columbus wasn’t in the least unique, as anyone who has read the history of Spanish America will know. Nevertheless, if the people of Chicago, through their elected leaders, decide to remove his statue and replace it with one of Abbie Hoffman, that’s their prerogative.

The current “know nothings” also believe in guilt by association. General U.S. Grant’s wife came from a family of slave holders; thus his statues should come down, never mind that his victory in the Civil War was what made the theoretical emancipation of slaves an actuality. Speaking of emancipation, Lincoln’s wife, Mary Todd Lincoln, came from a family of Kentucky slave holders. Perhaps we should tear down the Lincoln Memorial; or, even better, keep the  structure and replace Abe’s statue with one of Karl Marx.

We cannot judge historical figures by today’s standards. Columbus lived in a violent age. If you were to actually read the history of England in the same period, for example, you would be appalled to discover the cruelty with which people were tortured and executed. What was done during the religious wars of the 16th Century, by both sides, would curl your hair.

While it may be true that the failings of our past were once glossed over, this has not been true for decades. That nearly every educated white person in the 19th Century, including Lincoln, believed that blacks were inferior is well known. Yet, at the same time, they also believed that all persons, regardless of their race, should enjoy the benefits of freedom, and that is to their credit. Yes, Jefferson owned slaves. He was a hypocrite for both owning them and espousing the concept that “all men are created equal.” But he knew he was a hypocrite; and despite his human failings, he wrote the Declaration of Independence and helped found a republic that is still trying to perfect itself.

We all know the old saying: “those who don’t know history are doomed to repeat it.”

Perhaps we should replace it with “those who don’t want to know history are bent on destroying it.”