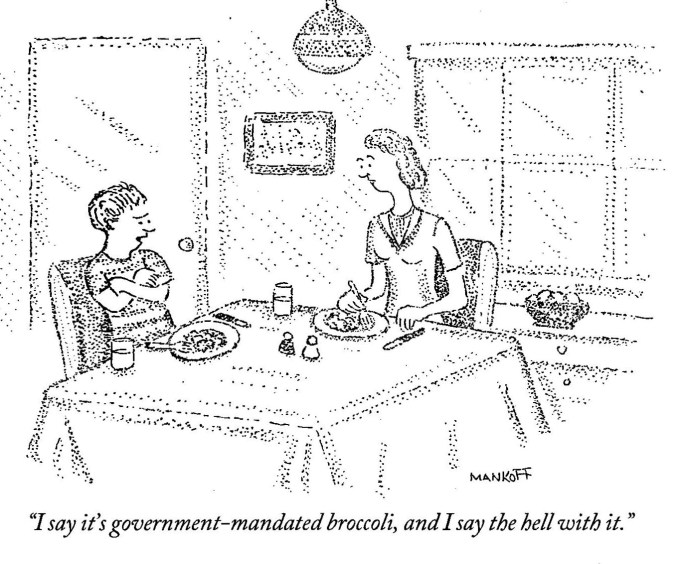 There are people in the world who are both alive and thriving, and yet have never eaten broccoli, much less Brussel sprouts. Unknown in America until after World War II, it’s impossible now to avoid great piles of broccoli blocking the aisles of every grocery store in our fair land.

My first experience with it came one day when my mother returned from the High Low supermarket on 71st Street in Chicago’s South Shore neighborhood. Among the items in her grocery sack was a package of Birdseye frozen broccoli. Frozen vegetables were then a new and daring culinary advance, particularly since the refrigerators of the day had only vestigial freezers. Heretofore, vegetables either came in cans, or fresh (but only in season). Canned veggies were the staple in our house. Apparently, broccoli couldn’t be canned; although neither could asparagus, but  they did it anyway.

When you took the vegetable out of the package, you were left with a frozen brick. This you placed in a pot of boiling water. In a few minutes, the brick was transformed into a soft and unnaturally green mass, with a vaguely cabbagey taste. Now, of course, the fresh vegetable is readily available year round. It still tastes the same, however.

(By the way, most green vegetables are mildly unpalatable. The better cooks will roast, fry, or even burn them to impart some flavor, adding copious amounts of garlic and salt to further hide the natural blandness.)

From whence did it come? As it happens, broccoli (or Brassica oleracea, to be precise) is native to Italy. Like so many vegetables and other plants, it started out as a roadside weed. One day, the ever inquisitive Roman Emperor Hadrian noticed it as he rode his horse along the Appian Way on his way to his suburban villa. Being famished and still some way from home, he decided to risk a bite. He wasn’t overly impressed, but he survived. It then occurred to him it would make a cheap supplement to the diets of his many slaves. And not only that, but they would do the public a service by tidying up the famous road. I should also mention that the legendary emperor also built the famous Hadrian’s Wall to keep the Scots out of Britain. It didn’t work; nor did his famous saying that “all roads lead away from Rome.”

Eventually, “ebraverde”, as it was called, lost favor and was all but forgotten until it began to be cultivated in the 19th Century in the Calabria region of Italy, primarily as food for pigs. The son of one of the farmers, Guido Broccoli, decided to emigrate to America. Hearing that the Americans would eat anything green, he decided to bring a sack of ebraverde seeds along. Sure enough, he planted some seeds in the back yard of his Brooklyn home. He decided to sell the crop at the local market, but decided “green weed” might be a turn off, so he named the vegetable after his ancient family’s name.

Today, while no one really likes broccoli – the first President Bush famously banned it from the White House — its nutritional benefits have kept it in favor. It is almost always doctored up in some way. People who prefer good health to good food even eat it raw. One often finds it on a tray with other raw vegetables, arranged around a bowl of whitish dip. At cocktail parties it is often ignored in favor of the cheese and salami tray.

Anyway, it turns out that the descendants of Guido get a penny for every mouthful of broccoli eaten. One of them, Albert “Cubby” Broccoli, made so much dough that he decided to invest in motion pictures. Now, you might wonder where he got the nick name “Cubby.” Family lore says that one of his cousins thought he resembled the famous comedian, Ish Kabibble (real name: Ishtar Kabibblebopper). Now largely forgotten, Ish was once almost as famous as Kathy Griffin. In Brooklynese, Kabibble is of course pronounced “Cubby.”

In any event, Cubby said yes to financing Dr. No, the first of the endless stream of James Bond movies. Although Cubby is no longer with us, his family continues to reap the benefits of his wise investment in the movies. Oh, and they still get a penny every time you take a bite of that roadside weed. And have you noticed that every time James Bond is seen eating, there’s broccoli on his plate?

7 thoughts on “Eat Your Vegetables!”