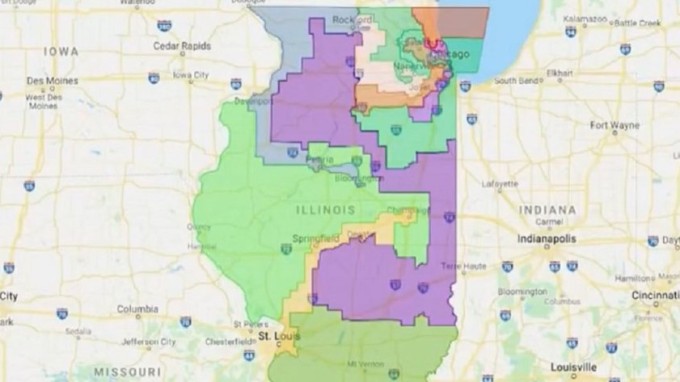 This is It; I Promise!

I know. You’re sick and tired of me harping on how politicians of both political parties use redistricting to rig the democratic process in their favor. You have my solemn promise that this is the very last time – at least for this year – that I’ll point out that they do it to insure that they keep their jobs and stay in power, much like Putin does in Russia (and Stalin did before him).

The map above is the latest outrage. Since it was designed by the Democratic Party, it should result in a Congressional delegation for the next 10 years from Illinois of 14 Democrats and 3 Republicans, instead of the 13 Democrats and 5 Republicans at present. If you’re a math wizard, you’ll have noticed that Illinois has lost a seat because it lost population for the first time in its history.

The Democrats have no shame; nor do the Republicans who do the same in states where they control the map. They’ll ignore the complaints of groups other than the Republicans who feel they’ve been shafted. In Illinois, African-Americans have already claimed they’ve been under represented. No doubt we’ll hear from other groups in due course, Hispanics for example. They’re actually split in two – Puerto Ricans and Mexican Americans, with little love lost between them. And who knows? Maybe White Illinoisans will wake up some day, realize they’re in the minority and demand equity.

(It should be noted that on Tuesday, a three-judge panel for the Federal court for the Northern District of Illinois declared the map formerly approved for state legislative districts was unconstitutional, not because it was partisan, but because it was not based on final Census figures. It will be interesting to see how the legislature and Governor Pritzker, who signed off on the map, will spin this. I’ll be shocked if any “new” map results in significant changes.)

All of this will continue so long as we separate our fellow citizens by race, ethnicity and voting history. The Founders – those poor discredited saps – actually believed in the concept that “all men are created equal,” even if they fell short in implementing it. They would be bemused and confused to discover that many now believe that African-Americans, for example, can only be properly represented by another African-American. Ditto Puerto Ricans, Mexican-Americans, and, presumably, Whites.

As it happens, I’m White (too white to go out in the sun without sunblock). My state representative, LaShawn Ford; state senator, Kimberly Lightford; US congressman, Danny Davis; and Cook County commissioner, Brandon Johnson, are all African-Americans. This doesn’t bother me in the least; as far as I know, they’re doing decent jobs. What does bother me is that their districts are configured so that they can’t lose. When I go to the ballot box, I have as little actual choice as a citizen of Russia. No credible Republican candidates ever appear on my ballot.

In my view, “voting rights” should be limited to just guaranteeing that no arbitrary barriers should be constructed to prevent American citizens from voting. These rights should not extend to insuring that racial and ethnic minorities should be in districts where they are the majority of voters. Nor do I believe that requiring a form of identification is a real barrier. In Illinois, you must register to vote. When you do vote, all you need do is give your name and address. You are required to sign a form, but who believes that the signature is ever validated?

Dividing the state into equal contiguous legislative districts – both Federal and state – is easily done by an impartial computer program. Better a dumb machine than the kind that has a vested interest in retaining its power.