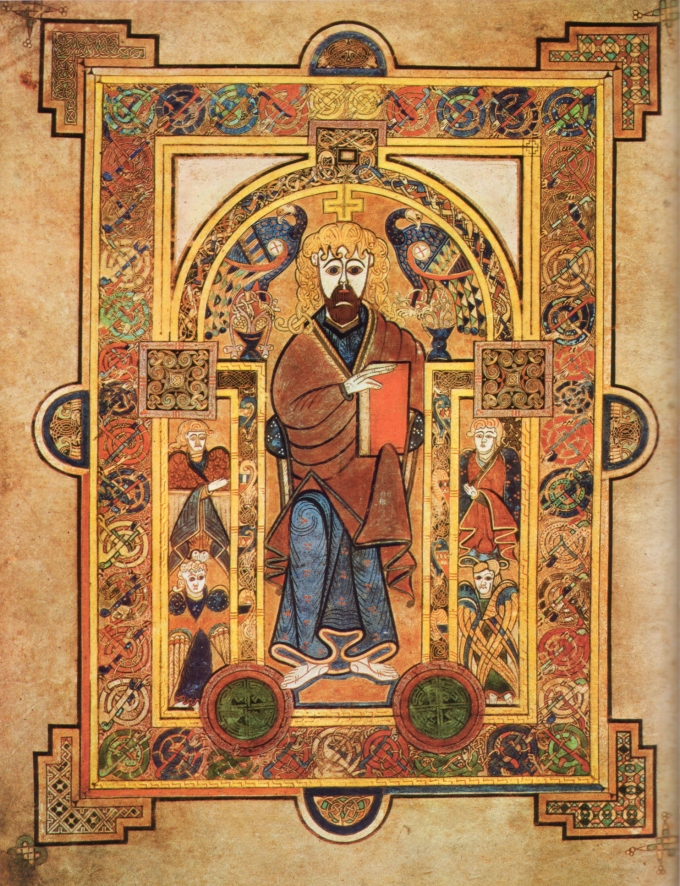 After the fall of Rome, priests and monks throughout Europe feared the worst. The barbarians seemed more interested in pillage and rape than in the heritage of Greece and Rome. They appeared to worship rocks and trees, and didn’t seem particularly interested in leading sober, responsible lives. They weren’t faithful to their wives and they drank a lot too.

Even worse, they thought nothing of taking a scroll or book and tossing it onto a fire to keep it going. So, very quietly, the clergy began tucking manuscripts under their robes and fleeing to an island so remote and inhospitable that there they felt safe even from barbarians.  The island is now called Ireland.

For the next 500 years, until they felt the coast was clear, they preserved the wisdom of the ancients in remote monasteries and thus saved civilization.

This period is called the Dark Ages, not because there was less actual light, but because the people of Europe lived in ignorance and despair. Of course, we have few details of their lives because the historians were holed up in Ireland. In such cases myth takes the place of fact. This is not to say that some elements of these stories were not true, just as some parts of an Oliver Stone movie may be true.

We’re fairly certain, for example, that someone very like King Arthur did exist, but we can never know whether he looked more like Richard Burton or Richard Harris. We do know that the wheel had not been lost, since it is said that Arthur dined at a round table. In addition to hacking away at great joints of Ox, he amused himself by sending his knights on long quests for something called the Holy Grail, which was presumably the cup that Christ used at the Last Supper (it may also have been used at the Last Breakfast too, but that’s pure conjecture). This got them out of his hair for long periods of time, in particular Lancelot, who was known to cast his fevered eye upon Queen Guinevere.

Lancelot was ever confused, since he spent a good deal of time searching for Excalibur, a sword that for some reason had been stuck in a stone. He finally found it, wrenched it free and used it to kill the Holy Quail. By the time he got back to Camelot, both Arthur and Guinevere were in Valhalla. They had died in each other’s arms, a tender scene later immortalized by Mallory in Le Morte de Arthur (or the “Death of Arthur,” if your French is rusty).

The myths of Camelot have engaged legions of artists down to the present day. Novels, plays, paintings, epic poetry, movies and comic books have all used the story as grist for the artist’s muse. There have also been operas, although many of these have mythcarried.

When Lancelot returned, in addition to finding his lady love dead, he found he was now a vassal of the new King, Ethelred. He was the son on Arthur’s sister, Princess Ethel and the Viking interloper, Eric the Red. Thus began the first famous line of English kings. Notable among them was Ethelred the Ready, who was known to keep his fly open at all times. His son was Ethelred the Unready, who was given to sleeping late and who sometimes forgot his head, which made a curious sight. He was ready enough, however, to produce Ethelred the Really Red, who had not only the dynasty’s signature red hair but a famously bulbous drinker’s nose. When his own son was born, he was so much the worse for drink that he bellowed “he canoot be my son.” It seems the little prince had black hair. The midwife thought Ethelred was naming him, so he became King Canute.

Ethelred promptly died of alcohol poisoning, so King Canute the little tyke became. Even by later standards of royal pomposity, Canute was notable. One day he went to the seashore near what is now Brighton to get a bit of Sun and build himself a sandcastle. As still happens, the tide eventually began to come in. Fearing the worst, Canute ordered it to cease, having built himself a dandy little castle. It didn’t, whereupon Canute went into a sulk. While he was in it, the Saxons sacked his real castle and deposed him. Although an Angle, poor Canute didn’t have many. To keep the peace, the Saxons permitted intermarriage, thus creating the Anglo-Saxon race.

Meanwhile, in Ireland, the monks were busy copying all the books, scrolls and other bits of paper they had carried from Europe. As you can imagine, it was tedious work. To while away the long days, they took to embellishing some of the letters with fancy stuff and drawing little pictures. The results were so lively and bright that they became known as illuminated manuscripts. The most famous of these, the Book of Kells, is now in the library at Trinity College in Dublin. Friar Kells, one supposes, was one of the more artistic monks.

Calligraphy (see Caligula, Chapter IV) was thirsty and exacting work. Fortunately, the monks had invented beer, which helped them get through the day. Since they sat quaffing suds while they copied, they soon became known for their heft. Ever since, the drink they invented has been called Stout.

Unbeknownst to the monks, or the various Ethelreds for that matter, in Arabia a wandering nomad named Mohammed had had a vision and was soon taking dictation from a God named Allah. The result was a new book of revelations called the Koran. In a latter day, a New Yorker named Joseph Smith had a similar experience and produced the Book of Mormon (but we’re getting ahead of ourselves).

The Koran took off where the Hebrew Old and Christian New Testaments left off. While Mohammed thought Isaiah and Jesus were good enough fellows, he claimed both were simply prophets like himself and there was only one God, the aforementioned Allah. To make his point clear, he decided to conquer the world. He took the same route as the Carthaginians, across North Africa. While he died before the campaign was over, his armies continued and soon conquered Spain.

The Franks got wind of what was happening and gathered an army on their side of the Pyrenees, confronting the Mohammedans (as they were now called in honor of the aforementioned Prophet) at Tours in 732. They prevailed and sent the hordes packing back over the mountains. Their leader, Charles Martel, was able to return to his vineyards, where he was perfecting a new spirit that has come to be known as Cognac. For his effort, he was awarded three gold stars by the Franks, which he used as the symbol of his new invention.

Charles’ son, Pepin the Short, united all of the Franks into a nation called Francia. Apparently, this name was considered a bit too effeminate and was ultimately changed to France, which it is called to this day. It should be noted that the original derivation of the word “Franks” came from the Celtic name for “frogs” and not a kind of sausage as one might suppose. Since the tribe that later became the Franks was known for their love of frog legs, their enemies took to calling them the “frog eating so and so’s” or “frogs” for short. Many, in particular the English, continue to use this ancient description.

It was Pepin’s son, Charles the Long Hair (in French, Charlemagne), who became the most famous of his dynasty. He was a real Christian gentleman and was happy to help Pope Hadrian I deal with his enemies in Italy. He soon conquered them and the Germans too. As a reward, Pope Leo III (Hadrian having departed this mortal coil) crowned him Holy Roman Emperor on the steps of St. Peter’s in 800. While he was grateful, he didn’t particularly like the weather in Rome, so he established his capital in Aachen, which, in addition to being easy to find in the German dictionary, has a moderate climate. He built a lavish palace there and sent word to Ireland that the Dark Ages were over.

His summons was perhaps premature. No sooner had he died than his grandchildren began squabbling over the empire. It soon was carved up into France and Germany, which has caused problems to this day. Also, the Vikings began to nibble away at the fringes, as did the Magyars, who came from the east in search of food, being of famously ravenous appetite.

Even though the Holy Roman Empire survived in name only, Charlemagne’s encouragement of learning had a lasting effect. Many of the Irish monks stayed on to found schools and breweries. As time went on, most European nobles could speak Latin as well as their own language, and could spout chapter and verse from the Bible. Only one country, England, held to its doggedly ignorant ways, but that was soon to change.

(Next week, we’ll be caught in the middle.)

2 thoughts on “History of the World, Chapter 5”