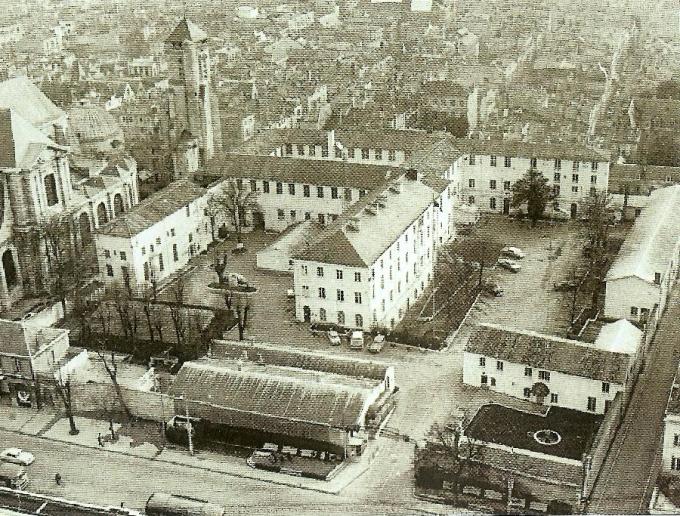 The Fortunes of War

In last week’s blog, I mentioned that I had been trained as a cryptographer – one who encodes and decodes classified messages – by the US Army. I’m not sure how it’s done now, but after training you received your orders, i.e., where you would be stationed. As a draftee, this would normally be for 18months.

What you didn’t want was orders for Korea, Alaska or an infamous remote communications center in Eritrea. The overseas orders never actually said directly where you were going; instead, they showed the Army’s post office address, in my case APO (Army Post Office) 209, US Forces. While many APOs were well known (Germany, Korea, etc.), no one seemed to know where APO 209 might be (or they weren’t telling).

The first stage of my journey to APO 209 was a chartered Lockheed Constellation from Augusta, GA to McGuire Air Force Base in New Jersey, thence by bus to nearby Ft. Dix, where we whiled away the time until our troop ship was ready by pulling KP at a base mess hall. After a few dreary days, we boarded a bus headed to the Army Terminal in Brooklyn, where we boarded the USNS General Patch, destination Bremerhaven, Germany.

Troopships are now a thing of the past. Ours was named after General Alexander Patch, who had commanded the US 7th Army in World War II. His namesake was 609 feet long, and designed for function, not comfort. My stateroom was a large space at the bottom of the ship, with narrow bunks piled four high. Naturally, by the time I got there only the top bunks were left. One of the amusements of my fellow soldiers was watching me climb in and out of mine.

After 11 seemingly endless days at sea – when I first read a James Bond book – we finally arrived in Bremerhaven. By then, one of the Sergeants on board had told me that the 200 APOs were in France, which cheered me up a bit. From the ship, we boarded a train sitting next to the dock. Early the next morning, we arrived in Paris.

Now, I have since been to Paris several times, but this first time my exposure consisted of what I could see out the windows of an Army bus as it traversed the city from the Gare du Nord railway station out of the city to the South. Our route was basically Orleans-Tours-Poitiers-LaRochelle (where I was headed as it turned out). I remember two things clearly – seeing the cathedral of Chartres rise out of the countryside, and running out of cigarettes.

I left Ft. Dix with a carton of Camels, which seemed sufficient. I guess my idea of crossing the Atlantic was more on the idea of the Queen Elizabeth or SS United States rather than the USNS Gen. Patch. I ran out in Paris. When we got to a rest stop, there happened to be a café nearby, so I went in to buy a pack. They were happy to accept dollars, but had no American cigarettes, so I bought a pack of Gauloises Caporals. In those days, its blue pack was not wrapped in cellophane, which apparently the French hadn’t yet discovered; ditto deodorant.

Now, Camels are among the strongest of American cigarettes, but the first puff of a Caporal made one gasp, and the smoke had an odor something like burning leaves, which I guess they actually were in a way. For you connoisseurs of French cinema, they are the very fags that hung out of the corner of Jean Gabin’s and Jean-Paul Belmondo’s lips in their version of Film Noir.

As with many an airport shuttle I’ve taken over the years, my destination was at the end of the line. I was the only one left when – by then it was raining and dark – we arrived in the company area of the 532nd Signal Company. It was not actually in LaRochelle, but adjacent to a US Army Hospital 10 miles west of town.

The duty sergeant directed me to a single-story barracks, and told me to pick out a bunk with empty foot and wall lockers, and report back to company headquarters at 0700 in the morning. Oh, and he said that the latrine and showers were in a separate building next to the barracks if I wanted to clean up (which I desperately needed to do). Aside from a light at the entrances at both ends, the barracks was dark. I did find an empty bunk, dropped my heavy duffle bag, and lit a Caporal. After a minute or so, a gruff voice at the other end of the barracks greeted me with: “Put out that Goddam Frog cigarette. We don’t allow them here.” This was followed by the sound of stomping boots, which belonged to a hulking figure who emerged out of the gloom and threw a pack of Lucky Strikes on my bunk.

It turned out my grumpy benefactor was Specialist Moser, who everyone called Mose. We became good friends. His only failing was a love for Hank Williams, whose records he played continuously on the barracks phonograph. I eventually bought Dave Brubeck, Ella Fitzgerald and Frank Sinatra albums and claimed my fair share of phonograph time. Mose was a teletype repairman and was in the ¾-ton truck with me and others the very next day when we went into LaRochelle to go the work.

Our duty station was on the city’s main square. It was (and still is) called Aufredi Caserne. That’s it in the photo. The street in front is Rue Aufredi, named after a 12th Century merchant who was instrumental in developing LaRochelle as a major trading and fishing port (New Rochelle, NY is named after it. When the Huguenots were forced out of France by Louis XIV, many embarked from LaRochelle and ended up in that area of New York.)

With the advent of steam ships, the harbor became too small. The new, modern port of La Pallice was created south of LaRochelle, and the former port was used primarily for fishing and pleasure boats. And La Pallice was the reason we were there, as it was a major port of entry for the US armed forces in Europe. Most of the message traffic at our communications center (at the far right back in the photo) was related to it. But we weren’t the first tenants.

As far as I can determine, the complex was built early in the 20th Century primarily as a hospital by the French Army, although apparently there was a telephone exchange and communications center as well. It would have been quite busy during World War I, although the actual fighting came no where near it. It would have served the same purpose during World War II; again, the actual fighting never reached that far South (LaRochelle is south of St. Nazaire and north of Bordeaux on the Atlantic coast). After the French surrendered in 1940, it was taken over by the German Navy, who built one of their submarine pens down the coast in La Pallice.

Although Allied bombers tried to destroy the pens, they failed. They’re still there, with pockmarked roofs the only damage. LaRochelle itself was never bombed and survives today with all of its charms intact. When the Allies invaded in June, 1944, they bypassed the city; the German garrison was still there when Germany surrendered in May, 1945. After the Germans were repatriated, the US Army took it over. Part of it was used as a hospital until the new, larger hospital was built 10 miles west.

When I was there, in addition to the communications center and telephone exchange, it housed the headquarters of the transportation battalion that served the port, a unit of the Army’s Criminal Investigation Division (CID) and a small Naval detachment.

As I mentioned, Mose was a teletype repairman. Working with him in the repair shop was a former German sailor named Fritz. As it happened, when we took over the communications center from the Germans, it included their equipment. Not to go into too much detail, messages were typed into one machine that produced perforated tape, then transmitted through another. To create messages, we used American Teletype machines; to transmit, German Siemens units. These were elegant little machines, finished with black lacquer and gold lettering. Instead of being sent back to Germany, Fritz was hired to keep the Siemens running.

The repair shop was outside the communications center, which Fritz was not permitted to enter. By the time I met him, he had married a French woman and had a couple of kids. He was a little guy, always with a smile on his face. Mose was very fond of him and often had dinner with his family. He had reason to be happy, as he had gone from prisoner of war to valued US Army employee literally overnight.

As it happened, I was there for only 12 months, spending the remainder of my military career in the middle of the Mojave Desert. Fast forward to the late 1990s. My wife Jeanette and I were in Paris, and decided to take to high-speed TVG train to LaRochelle. A trip that used to take seven or eight hours in 1962 now took only three. Our hotel was directly across the square from Aufredi Caserne.

Le Grande Charles (De Gaulle) had left NATO in 1966 and booted us out, no doubt as thanks for liberating France in 1944; thus, the caserne was now once again a French army facility (I later learned it was the office that administered army pensions). I asked the soldier at the guard shack if we might be allowed to have a look around, as I had once been stationed there. He was about to do so, but had second thoughts and called an officer for permission, which he did not give.

Now over 100 years old, this minor military facility in a charming little French city has survived two world wars intact, but nevertheless in a small way reflects the fortunes of war in the 20th Century. By the way, we thoroughly enjoyed our visit to LaRochelle. There are a couple of stories about it that I might share another time.